Australia has one of the most diverse landscapes on the planet, 85% of flowering plants, 84% of mammals and 45% of birds are endemic. The age and geographic isolation of the land has encouraged a unique biota, however much has disappeared since European settlement; 22 bird, 4 frog, 1 invertebrate, 28 mammal and 37 plant species are listed as extinct in the Environment Protection and Biodiversity Conservation Act 1999 (EPBC), and many more are listed as endangered or threatened.
Extinct Markers aims to bring to light the toll that urbanization and introduced species has had on Australia’s fragile ecosystems by confronting the audience with the massive list of extinct animals and plants compiled by the EPBC, while at the same time celebrating the colour and diversity of the natural world.
The artwork takes the form of a series of coloured woven marker discs embedded in the forest, each disc coloured to mimic an individual species pushed to extinction.
Extinct Markers is a memorial, a reminder of our shared history and a colourful beacon highlighting nature’s complexity. 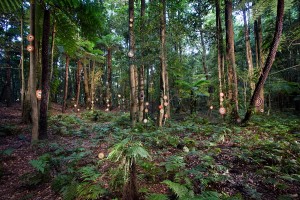