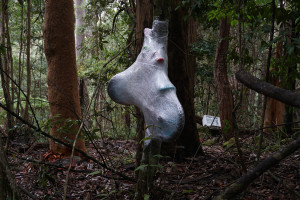 Image: Courtesy of the artist

Set within a pristine rainforest valley, UNDIGESTIBLE is an installation of household rubbish [non organic] salvaged from the streets of Katoomba. Along with haphazardly positioned items that sit easily within the biomass of the forest floor, there also exists a dispersion of several raised anthropomorphic sack elements, held either grafted to tree trunks or suspended from overhead branches. In terms of “form making”, the shrink-wrapped sack elements were inspired by a distant memory of having witnessed a spider (type unknown to me) handling its prey of a moth, which in scale was easily more than three times its own body. With fully outreached legs it held and violently spun the eventually compliant moth along its central axis, as though it were a spindle. This, while wrapping it with what appeared to be a continuous production of webbing in the form of sheet, not string. It then proceeded to dangle its now mummified victim from a branch, presumably to be had later.The suggestion here may be that a strange beast has likewise picked its prey from amongst the dumped, and cocooned it for eventual juice extraction. Unlike the moth however, the junk here will refuse to be digested, or at least not without consequence.