I make three-dimensional, text based, conceptual installations to explore the Obedience to Authority theory designed by psychologist, Stanley Milgram. Milgram’s theory explores obedience in society and suggests that in the presence of an authoritative figure most human morals become obsolete. By subtly referencing Milgram’s theory and also the 1960s Conceptual Art movement I investigate and challenge the socially constructed notion that text informs the visual. Text in a social platform becomes a form of authority, in the physical form of advertisement. I intend to separate the text from the visual and create a conversation between the viewer and the artwork.

I have explored fabrication, but mostly I use found, utilitarian materials such as cardboard and cement, to create building block sized text. Often the material subtly references consumerism and mass production.

There is an aspect of tongue-in-cheek with my work which I feel offers a subtle relief to the conceptual intensity commanding the work. My sentences can often be conceptual traps. By challenging the way text is used and read I intend to communicate my curiosity with social obedience through the use of traditional communication. 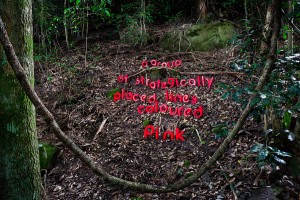 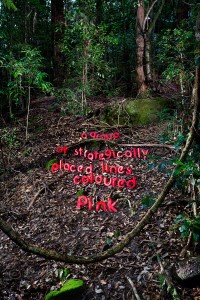