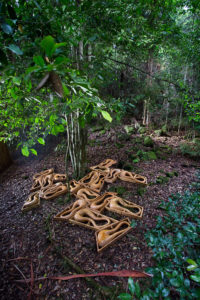 Layers is inspired by local sandstone formations which have naturally evolved in the landscape. Firstly, flat stone often displays a natural grid like pattern of cracks that intersect each other in relatively straight lines. Often the cracks have what looks like iron ore run through them. Another formation in the sandstone is multitudes of small holes that the observer could fit two coins in, which are also grid like in nature.

No doubt there are geological explanations for these features that span millions of years, however as a non-scientist my interest in the formations favours their aesthetic qualities.

My thoughts turn to small amoebic creatures that inhabited these environments in colonies.  Slowly over time they too, like us, evolve into grid inhabitants. Layers lays flat on a rock platform and is joined together to form one mass.